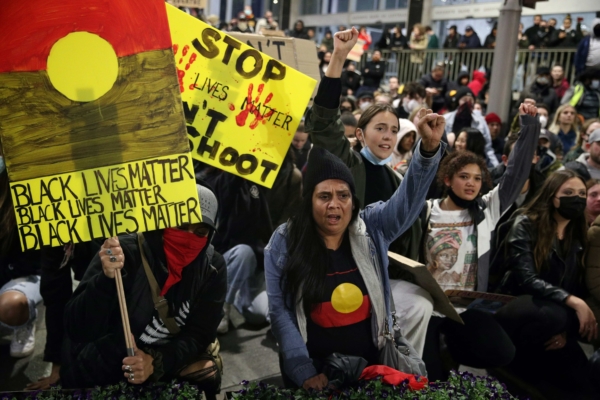 People protest in Sydney, Australia, on June 2 in solidarity with those in the United States protesting police brutality and the killing of George Floyd. Photo: Loren Elliott/Reuters
[Episcopal News Service] The killing of George Floyd by police officers in Minneapolis, Minnesota, on May 25 – and the pattern of police brutality against African Americans nationwide – have reverberated around the world, with protests spreading far beyond the United States, from New Zealand to Syria to Brazil.
Leaders from across the Anglican Communion have spoken out, condemning racism, supporting the protests and urging a renewed commitment to racial justice.
Archbishop of Canterbury Justin Welby, head of the Anglican Communion, released a statement – along with Archbishop of York John Sentamu – calling racism “an affront to God” and saying it “must be eradicated.”
“Systemic racism continues to cause incalculable harm across the world,” Welby and Sentamu wrote. “Our hearts weep for the suffering caused – for those who have lost their lives, those who have experienced persecution, those who live in fear. God’s justice and love for all creation demands that this evil is properly confronted and tackled.”
Welby also tweeted his support for Presiding Bishop Michael Curry and joined him in criticizing President Donald Trump’s photo op holding a Bible in front of St. John’s Episcopal Church, across from the White House, preceded by the forcible removal of nonviolent protesters and clergy from the area.
“I pray that those of us who are white Christians repent of our own prejudices, and do the urgent work of becoming better allies to our brothers and sisters of color,” Welby added.
Former Archbishop of Canterbury Rowan Williams had strong and specific criticism for Trump, saying the Bible photo op was “an act of idolatry … using the text that witnesses to God’s disruptive majesty as a prop in a personal drama.”
“In a context where racial privilege itself has long been an idolatry, where long-unchallenged institutional violence has been a routine means for the self-defense of that privilege, the image of the president clinging to the Scriptures as if to an amulet is bizarre even by the standards of recent years,” Williams wrote.
The Scottish Episcopal Church also condemned Trump’s actions, calling the photo op and the use of force against protesters a “blatant mis-use of both a church building and holy scripture.”
In an interview with BBC Radio, Sentamu said that if he weren’t staying at home to avoid contracting COVID-19, he would be out protesting.
“The problem is America has not been listening to the real problems of African Americans and people of color,” Sentamu said.
In South Africa, the Most Rev. Thabo Makgoba, archbishop of Cape Town and primate of the Anglican Church of Southern Africa, said he was “shocked by the death by homicide of George Floyd.”
“George Floyd’s killing flies in the face of the solidarity evident in the world’s response to the pandemic, and we condemn the brutal treatment he was subjected to,” Makgoba wrote. “May Mr. Floyd rest in peace.”
In a tragic coincidence, Floyd was killed during the Anglican Church of Australia’s observance of the National Week of Prayer for Reconciliation, which focuses on racial justice and unity in light of Australia’s oppression of Aboriginal peoples.
The Rt. Rev. Chris McLeod, the church’s national Aboriginal bishop, used the sad irony of the situation to affirm support for the Black Lives Matter movement and draw attention to similar injustices faced by Aboriginal Australians.
Floyd’s death “has triggered off a series of protests and riots around America, and protests here in Australia,” McLeod wrote. “It also reminded us that since the findings of the ‘Aboriginal Deaths in Custody’ report (1991) there have been a further 432 deaths in [police] custody. Just in the last few days we have also witnessed the violent arrest of an Aboriginal teenager in New South Wales. We can see quite clearly that reconciliation means far more than saying the right words and uttering the right prayers for one week of the year. Something is very, very wrong with racial equality in both American and Australia, and needs to be changed.”
The Most Rev. Linda Nicholls, primate of the Anglican Church of Canada, wrote a letter along with her counterparts in the Evangelical Lutheran Church in Canada and the United Church of Canada calling on all their members to dismantle systemic racism.
“Centuries of anger at injustice and anti-Black racism are literally bursting into flames as people stand for political and cultural change to address these deep-seated systems that work to oppress so many members of our communities,” they wrote in the letter, which included suggestions for taking action. “We want to affirm our commitment to ending our silence about and working towards the dismantling of anti-Black racism.”
The Anglican Church of Canada also reiterated its call, issued in late March, for its congregations to do more to address racism.
The Church in Wales expressed its support for Black Lives Matter in a statement that acknowledged the church’s historic complicity in racial injustice.
“Current events in the USA have brought to the attention of the world the extreme injustice of white supremacy and racism. In challenging racism, the church has much to learn and to repent of,” the statement said.
- June 08, 2020